Every app has a dictionary now. The Aedict suite.


In my recent forays into searching for better solutions to working with Japanese on Android I became aware of a new addition by the developer of Aedict, called (unflatteringly, but descriptively) "Aedict Reader Popup".

I think I've mentioned the following already, but the existence of a dictionary that uses the EDICT Japanese dictionary, i.e. Aedict, was the reason I originally bought a smartphone. Thus allowing me to hold a book in one hand and dictionary in the other while on the bus. Although I was almost ready to jump ship when Aedict turned paid, Aedict3 remained head-and-shoulders above the competition. 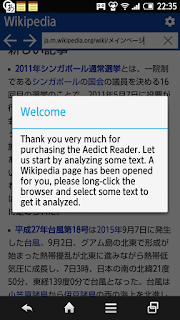 Looking through the various Japanese dictionaries in development, there are a number of promising (even free) alternatives available. Indeed, I have Jsho installed on my phone just to see how it develops from here (however, its current lack of technical dictionaries is a bit of a turnoff at the moment*).

It was while looking at these apps that I (quite accidentally) came across the aforementioned Aedict Reader Popup. Despite having my eye on Aedict's competition, I thought I would at least buy it and try it.

I was first presented with the screen to the right. This is AedictReader, a web browser that automatically translates Japanese to English. By accidentally skipping the next dialogue, I thought for a moment this was the entire app. But the settings allow it to be used pretty much anywhere (I've yet to find anywhere it doesn't run; hell, it will even display over World of Goo if I tell it to**). The reader does, however, serve as a useful introduction to Aedict Reader Popup's functions. 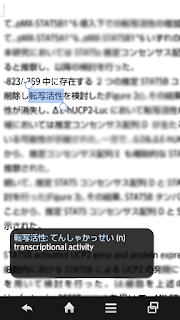 Once enabled to work across all apps (I think that is the default setting), copying text will result in a popup, as shown to the left. Any dictionaries you have enabled in Aedict3*** will be consulted for a match. The picture shows an example of the app being used on a biosciences document. Since I have the life sciences dictionary installed, "transcriptional activity" is correctly displayed when "転写活性" is selected and copied in my document viewer (I've blurred the rest of the writing in the GIMP*4 but you get the idea).

Tapping on the popup gives access to more advanced functions, including the ability to quickly switch to Aedict3 to have a closer look at the word and scrutinize it further. There is also the option to temporarily remove the popup or minimize it (down to about the size of a fingerprin; easy to push, but unobtrusive on my largish AQUOS Crystal).

You can set the popup app to remain in the notification bar; from there you can activate the popup even if using a program from which you cannot copy/paste. If you have the paid Aedict3 Kanjipad plugin, this lets you copy the character in-situ*5. You can also do a normal search, though with the app-of-interest, the popup, and the keyboard on screen, it does get crowded. On tablets; however, this is very manageable.

When reading books on the Kindle, Aedict's new popup app even seems to outperform Kindle's own dictionaries (see below), especially considering Aedict is aware of verb tense, while Kindle's is not!

The only thing I can imagine that would make this better is integration of the OCR package, so that I can hover the popup over some uncopyable text and have the popup translate it. A tall order, but given the completeness and robustness of the app, I wouldn't be surprised if such a feature does appear in the future.

Today, I expect almost every learner of Japanese, everyone with Japanese as a second language, absorbs the language in some way via their phones. Whether it is film, books, instant messaging, news, websites, or even games, any tool that could be used to take the chore out of looking up a new word, or a forgotten word, makes these activities even more rewarding than before. Thus, it is easier to spend more time getting better at Japanese.

The popup app extends the features of the Aedict suite into almost any/all app(s) and does so without compromising the ability to search multiple dictionaries. It works and responds well on phones and tablets, even where the most basic system functions (such as copy/paste) fail. From my own experiences, I surmise that there has never been a more robust, accurate, and flexible Japanese dictionary tool in history*6, besides -perhaps- the human mind.


*It is also light on other features, such as different methods for kanji lookup, though handwriting recognition is probably the way forward. Given the dictionary aims to be "simple, lightweight, fast and accurate. No unnecessary splash screens and no need to download any additional files", I'm not sure we'll see Jsho becoming the powerhouse that Aedict is.

**Rest assured, this is optional.

***And usefully, ONLY those dictionaries you have enabled in Aedict3's word search.

*4 "GNU Image Manipulation Program", before you get any odd ideas...

*5 previously you'd have to copy the character onto paper and then use the drawing to rewrite the character into the dictionary, or use another device with a Japanese dictionary. Either way, the new solution is much more elegant.

*6 good enough that I took the time to upload pictures, which I don't often do. Also its difficult to explain just how elegant the app is without them.
Posted by pouncingant at 4:17 PM